Happy Fan Art Friday everyone! Today I will be showing you two drawings. Both of them were made using watercolour paints. Both of these characters were villains in the manga and anime but they both change within the series. Plus I will be reading volume 15 and I am very excited. (^_^)
The first drawing is of Hiei from Yu Yu Hakusho. He was certainly one of the villains that was quite shocking. Particularly since I read this series back in my teens. But I admit he is very interesting. This is due to the fact of his many reappearances in the series and what Botan and Koenma have to do to get him to help. It's quite hilarious. Plus he grows much stronger from his first appearance in the series.
I drew Hiei in a much more older form but I am quite happy with it. 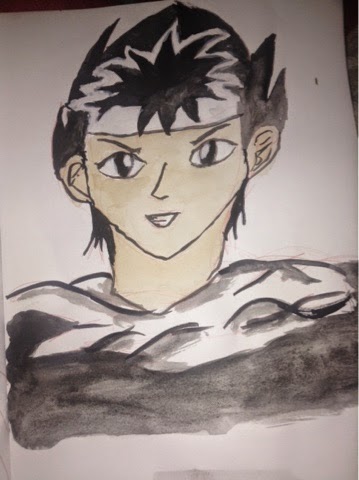 The second and final fan art for today is of Kurama who was also another villain of the series but just as interesting like Hiei. His background story as to how he became into his human form was quite nice too. He appearance in the anime and manga are both intriguing. I already like him as a character and he immediately became another favourite character that I really liked a lot.
I drew him here in his human form and just like the previous drawing I'm happy with it. 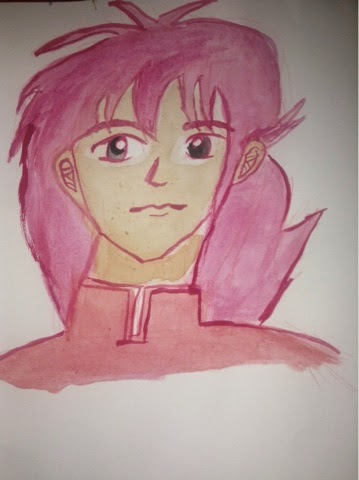 I really don't want to give an details of what happens in this series for I think that it would be great if you read the manga or watch the anime to find out. It really is great.
There will be more fan art next week. Thanks for visiting and please write a comment.
Posted by cherishyork at 01:03 No comments:

Happy Fan Art Friday everyone! Today's drawing will be about Jiro and Nahoko from the Studio Ghibli movie 'The Wind Rises'. It was directed by Hayao Miyazaki. This was the final movie that Miyazaki created. He then retired from making animation.
I was quite saddened by the news that this was the last movie. So I made an extra effort to buy my copy of this movie. I first watched this movie in Japanese first and for the first in a long while, I can understand some of what the the characters are saying. I felt quite happy about this because I have been studying for quite a while now. A week later I decided to watch the English dub and I was very very VERY impressive. Joseph Gordon-Levitt and Emily Blunt played these characters really well. Above all I found the movie to be really good and also great insight to the making of aeroplanes.
Also the movie was at a pivotal point in time. It was during the the 1920's onwards.
When this movie was out in the cinemas in the UK, the art book of the movie was released. I managed find it in my local library and read only halfway. This was mainly because it revealed a lot of spoilers for me since I didn't watch the movie. Also there was a lot of the information about how the movie began as well as the background storyline. I was was quite intrigued by this as I was able to find out a lot more.
For this drawing, I made the main characters in watercolour paints and made some blue spirals in a green background. 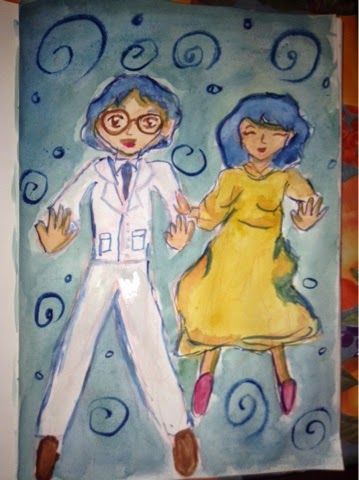 There will be more fan art next week. Thanks for visiting and please write a comment.
Posted by cherishyork at 00:15 No comments:

Happy April, Happy Good Friday and Happy Fan Art Friday. Today's drawing is inspired by a song by Kylie Minougue. The name of the song is called Fine.
The song is part of the album that she released last year. It is called  'Kiss Me Once'.  Not all the songs I liked on the album but the one was one of the few that I liked.
It has a great up beat tempo and I found myself dancing to this song a lot. Also this is one of the songs that I listened to more often when I draw.
For this drawing I drew a man dancing to the song with some of the lyrics in the background. Also I used the colour green because in most cases I use blue and this is something different. 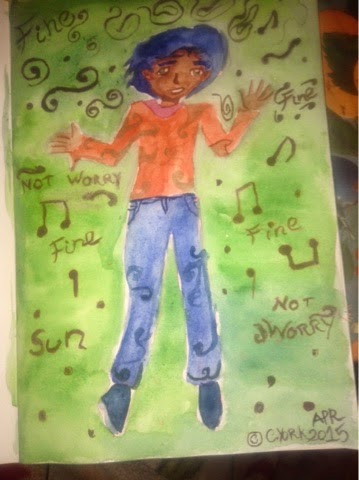 There will be more fan art next week. Thanks for visiting and please write a comment.
Posted by cherishyork at 01:33 No comments:

Fan Art Friday: Interpretations of the Sun and Night

Happy Fan Art Friday Everyone! Today's drawings are interpretation of something that you see every day. It is also based on some that I saw when I was very young. They were both made using watercolour paints and a 0.9 red lead in a mechanical pen.
In the 90's there was several adverts that showed various examples of how the weather can be shown through people. This advert was created by a company called Powergen. The adverts were shown before the weather appeared to people across the country.
So here is my way of homage to these brilliant adverts.
My first drawing is an interpretation of the sun. I decided to draw her in a dress that is a lot similar to a ball gowns. She also has a hat too. I'm quite impressed of how the sun came out. (:D) The second and final final fan art for today is an interpretation of the night. I wanted to imagine this person running through the sky as it gradually changes. Hence the various blues that you can see in this drawing. (;D) 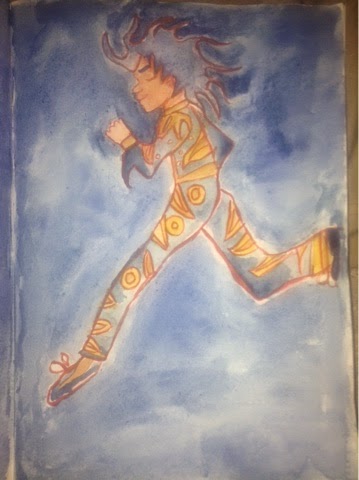 There will be more fan art next week thanks for visiting and please write a comment.
Posted by cherishyork at 01:08 No comments:

Fan Art Friday: Yusuke and Keiko from Yu Yu Hakusho by Yoshihiro Togashi and Kenshin and Yahiko from Rurouni Kenshin by Nobuhiro Watsuki

Happy Fan Art Friday everyone! Today's drawings are about two manga. I have read them both when I was 17. I'm still reading them today. These drawings were created using watercolour paints and 0.9 red mechanical pen.
The first drawing is of Keiko and Yusuke from the manga Yu Yu Hakusho. I really like this manga a lot.   It tells the story of Yusuke and also Keiko who is his old school friend but very soon will be his love interest. There is some rivalry in this manga too but it is portrayed in a very humorous way. Yusuke's rival is a guy called Kuwubara. There is also a anime of the series and it is just as good as the manga. I'll be reading volume 14 of this series very soon.
In this drawing, I drew both Yusuke and Keiko in mid air. 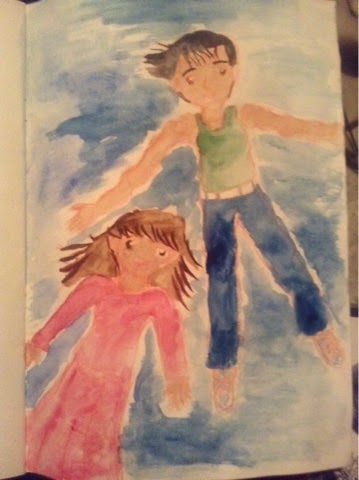 The second and final fan art for today is of Kenshin and Yahiko from the manga Rurouni Kenshin. It's probably one of the most awesome manga that I have seen and I'm very pleased to have read it. Kenshin is seen wandering the streets of Japan in the Meiji restoration period. At some point he meets a girl called Kaoru. Much later he meets Yahiko who is becomes a student at a dojo that Kaoru teaches. I drew both of these characters because I felt that Yahiko was someone who had looked up to Kenshin. Kenshin is a bit of a father figure to him. There's a lot of action and romance in this manga and I'm very impressed with the anime too. I watched the anime up to a certain point as there were some episodes that were not part of the manga. I wasn't quite satisfied with this at all. I'm currently on volume 19 of the manga and I'm really looking forward to reading it. This drawing, I wanted to them to stand with their back against each of other with the awareness knowing that both of them are near. 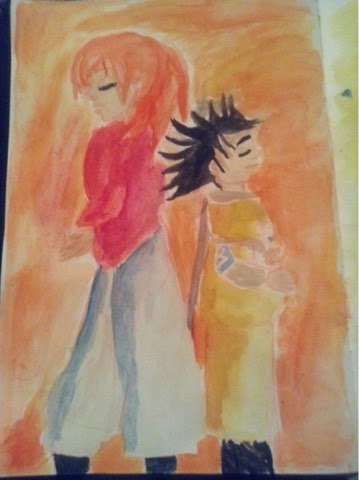 There will be more fan art next week. Thanks for visiting and please write a comment.
Posted by cherishyork at 01:56 No comments:

Happy Fan Art Friday everyone! Today's drawings will once again be based on Tempo Lush Tales. The stories that were based on these two drawings were really amazing and quite interesting too. (All of the stories in the volume were great. :D) These drawings were made using watercolour paints and a 0.5 mechanical pen.
The first drawing is Vincent from the short story Two sons written by Richy K. Chandler and illustrated by Inko and Chie Kustsuwada. I really enjoy this story as it gave an immense example of both brothers are like. I really liked Vincent because he seemed to be very secretive and I felt the smartest of the two brothers. I smiled at the way he handled a certain situation that involved both him and Sam. Plus he also seemed quite calm too. There were two drawings that I made that were based on Vincent but I felt that this one was better. It is of him wearing a waistcoat and a bow. I'm quite happy with this drawing. 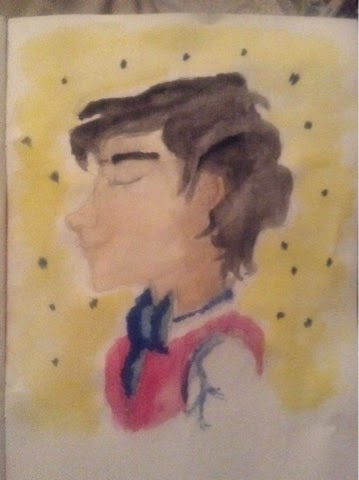 The second and final drawing is of the President of West Tibia, Jackson and Suzie from the short story The president of West Tibia also by Richy K. Chandler and illustrated by Paul Shin. This was also another great story too.  It's also quite funny too.There was something that the president did that made Suzie return and try and put something right. He also was quite saddened of something too. Jackson tried to calm him too. For this drawing I found it quite complex to choose the appropriate colours for each character but I did what I can. 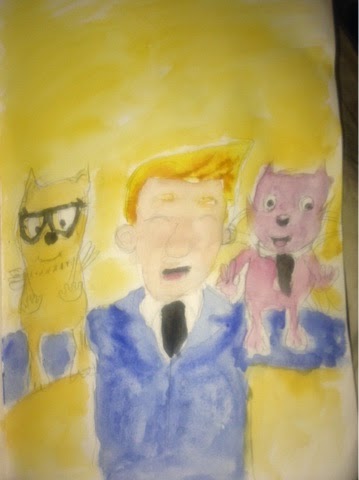 There will be more fan art next week. Thank you for visiting and please write a comment.
Posted by cherishyork at 00:16 2 comments:

Happy Fan Art Friday everyone! Today I'll be showing you two drawings. These drawings were made using a mechanical pen using red lead. These drawings are of two members from a popular girl group from Japan.
The name of the girl group is called Morning Musume. I heard of this group a couple of years ago and I admit they are very good. I did a bit of research and found out that there were many members have come and gone. Their music is really awesome and it is another group that made me smile.
These drawings were made as part of drawing project where artists around amateur or professional were asked to make drawings of the members. I decided to do two and yearned to post them on here. I'm very impressed and pleased with them and I hope you like them too. 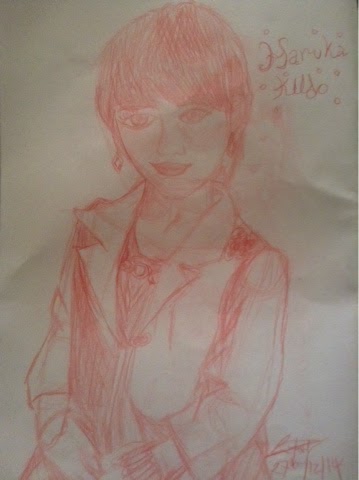 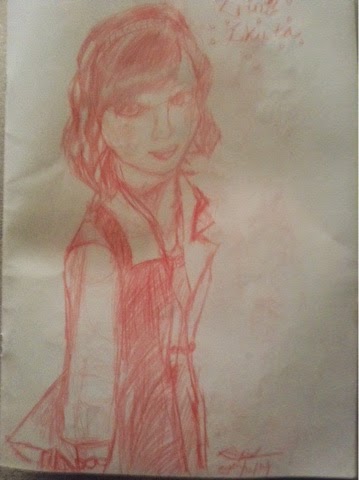 There will be more fan art next week. Thank you for visiting and please write a comment.
Posted by cherishyork at 02:07 No comments: